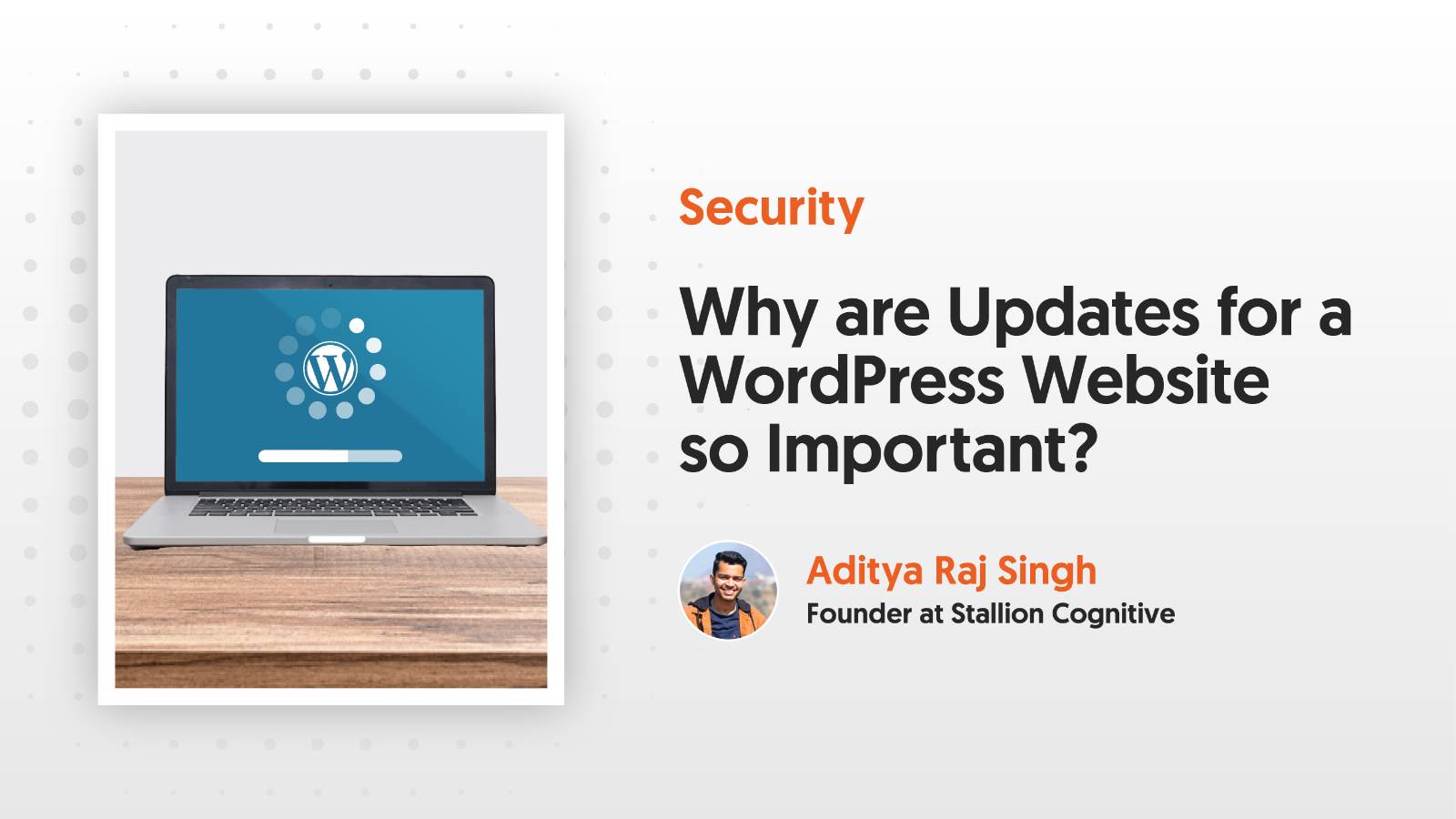 Why are Updates for a WordPress Website so Important?

There is no doubt that web development technology is super vital for businesses in this technologically advanced world. And updates play the most important role in providing strong performance, better security, and boosting website effectiveness.

As we keep our mobile phones, apps, and even computers or laptops updated all the time, similarly making regular updates to your WordPress website is important too.

According to the latest report by W3Techs, WordPress acquired 43.2% market share among all websites worldwide and is used by 65.2% of all websites using a Content Management System (CMS) in 2022.

By the end of this blog post, you'll surely find answers to all your questions. Without further ado, let's get started.

What Are WordPress Updates?

WordPress updates are releases of new versions of the WordPress core software and updates to themes and plugins. These updates become available periodically and can be installed manually or automatically.

WordPress is one of the largest and most active developer communities, which results in frequent updates. Let's examine the different types of WordPress updates you could encounter.

Updates that improve security are among the most vital. There are flaws in every single piece of code ever written. Despite best efforts, complicated software often has issues upon release. You may "patch" a problem with a security update by distributing new software.

WordPress often utilises other web technologies that may include flaws. Once these flaws have been discovered, security updates will be issued to fix them.

When code is released, it doesn't always function as expected. Sometimes just one particular kind of gadget or browser has a bug. When fixing a defect with no noticeable consequences, you may consider it a minor fix. These fixes are more concerned with the internal functioning of a website than with any potential security risks.

On the contrary, fixing a major bug would need a complete rewrite of the programme, or it would be a game-breaker for the system. Even with that tiny glitch, the system would still work normally. After all, taking care of your WordPress website is one of the best things you can do to boost the number of new visitors, ensure site security, increase returning traffic, and more.

Modifications to functionality will be categorised in the same way that bug fixes are. These upgrades don't usually make any noticeable changes to WordPress. They add functionality without influencing other features. Such updates are the least problematic to manage since you need not worry too much about any potential site breakdown after installing them.

Besides, when a major version of WordPress is released, there is always a corresponding change in how some features work. As a result of the significant changes included in these upgrades, it is strongly recommended that users do extensive testing to ensure that their preferred customizations (such as themes and plugins) will operate properly after installing the new version.

Reasons Why You Should Always Keep Your WordPress Website Updated

Let's take a look at the top reasons to use the latest version of WordPress.

Now, if you were using an older version of WordPress, your experience would be very different from that of someone using the most recent version. Also, WordPress support is unlikely to be available for your version.

As open-source software, WordPress is available at no cost. This lets developers add new features by making plugins and themes that work with the software. Since the source code is freely accessible, it doesn't take long for hackers to uncover and exploit security holes.

WordPress is updated often with new security features and fixes for previously discovered bugs to combat this. Although these updates often address critical bugs and flaws, they also frequently provide a wealth of new features and capabilities.

For instance, WordPress 5.9.1, which was released on February 22, is a maintenance update that fixes 85 bugs

Updating WordPress plugins and websites is also the best way to get the most out of their performance. Upgrades are often part of new releases, which also speed up the website. By making pages load faster, you can reduce the number of people who leave your site immediately, which helps keep people interested in what you offer.

For instance, with version 5.4 of WordPress, the block editor loading time was decreased by 14%. (compared to version 5.3). Search engine optimization (SEO) also places significance on a website's loading time since it directly correlates to the site's number of visitors. You should probably give this even more thought since Google's algorithm uses a website's speed and performance as one of its signals.

As WordPress 6.0.1 is now available for download, updating it timely will ensure that it stays on top every time. The longer you wait to upgrade WordPress, the more your site is in danger of being hacked or experiencing serious difficulties or bugs.

Reading the release notes is the first step on the WordPress website updation journey. This will offer you a preview of the new and improved features with the upgrades. If possible, the next step is to test the update on a development site. If there are any problems with the update, you will have time to fix them before releasing the update to the general public.

Tag:
Maintenance
I hope you found this article helpful.
If you want us to do website design or SEO for you, click here.
6 FREE tips for your website sucess!
Download our free guide to understand how to evaluate the success of your website, plus tips that will help you make improvements today.
send me my guide